Cringeworthy Recap: Jim and Pam had made a huge deal to everyone in the office not to say anything about Pam being pregnant because of her very traditional and conservative grandmother. S0, when Jim, who is usually so smooth, is the one to spill the beans it’s hard to watch him flop around mid-toast and poorly cover his tracks. Plus, add in Michael intervening saying that the two had “made a mistake” and you’ve got a whole bunch of awkward.

14. Michael Can’t Tell Which Girl is His Date

Cringeworthy Recap: First of all, the fact that they’re singing “Your Body Is a Wonderland” only amped up the awkwardness that was this entire episode, but the look on Michael’s face when he realizes that he can’t remember which Benihana waitress was his date is pure cringe. Not to mention he later marks her, so there’s that. 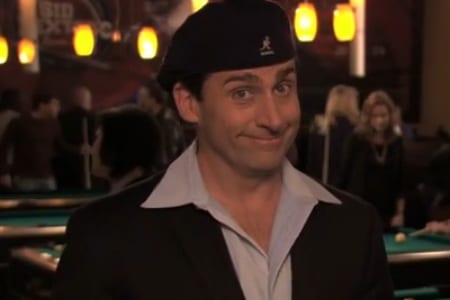 Cringeworthy Recap: Date Mike is cringey on his own, but it really is Michael choosing to become Date Mike that is even worse. While out with Pam, Jim, and Pam’s friend, Michael is totally charming and his it off really well with Julie, that is until he learns that he’s actually on a date with her. Then, in the blink of an eye, he transforms into the “chick magnet” that is Date Mike and everything barrels downhill shortly after. 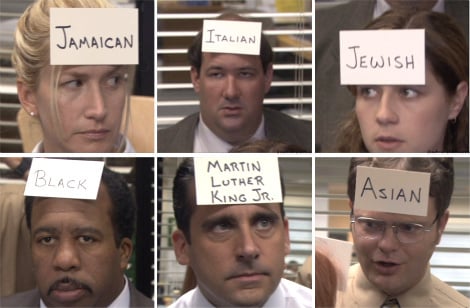 Cringeworthy Recap: Diversity Day was going to be a disaster from the start because if there’s one person who should not be teaching messages on racial tolerance it’s Michael Scott. Watching everyone try to scoot around giving clues to the cards on people’s heads was bad enough, but then when Michael takes it too far, Kelly slaps him in front of everyone and it is so uncomfortable to watch.

Cringeworthy Recap: Andy’s harmless, but he sure does not know how to read a situation. Not only is his speech a rough start, but then he has to run off stage to get to Anglea and then makes her repeat her solemn “OK” into the microphone, all while Jim stares on in horror because he was planning on proposing to Pam that night.

10. When Michael Spanked the Intern

Cringeworthy Recap: Michael spanks his adult nephew in front of everyone in the office – need I say more?

Cringeworthy Recap: It was always kind of sad and weird to watch Toby’s attraction to Pam over the years, but when he awkwardly touched her leg, then announced he was moving to Costa Rica, and then ran and jumped over the fence, he really Out-Toby’d Toby.

Why It Hurts To Watch: This almost would have been better if he had just brought out Date Mike because there was nothing funny about this scene. It’s actually one of the few times that Michael is just straight up mean. He doesn’t hide his distaste or disappointment over what his blind date looks like and pretends to not be Michael even though the barista is trying to give him his drink. The whole scene is just horrible horrible horrible.

Cringeworthy Recap: To prove to everyone that he is not homophobic, Michael decides to prove his openness by spontaneously kissing Oscar in the conference room. The worst part isn’t the kiss though, it’s the slow burn leading up to the kiss. 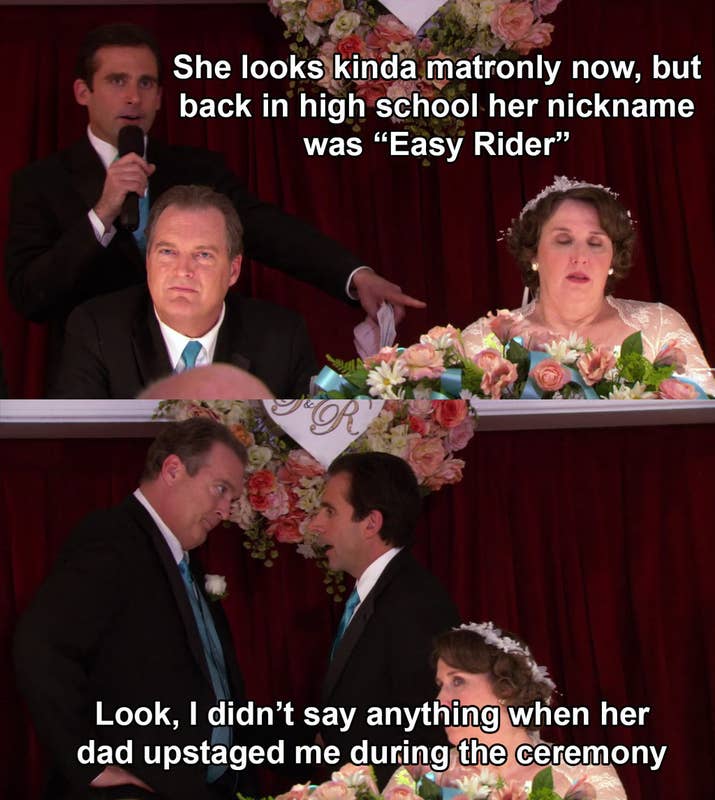 Cringeworthy Recap: Phyllis’ wedding was filled with so many awkward moments at the hands of Michael that it was almost unbearable. One moment that tops the list is his embarrassing speech in which he tells everyone that her high school nickname was “Easy Rider”. Poor Phyllis.

Cringeworthy Recap: Just the public nature of this moment alone is extremely cringey, and then the fact that he waits around until the appropriate time to do it all over again is even worse. 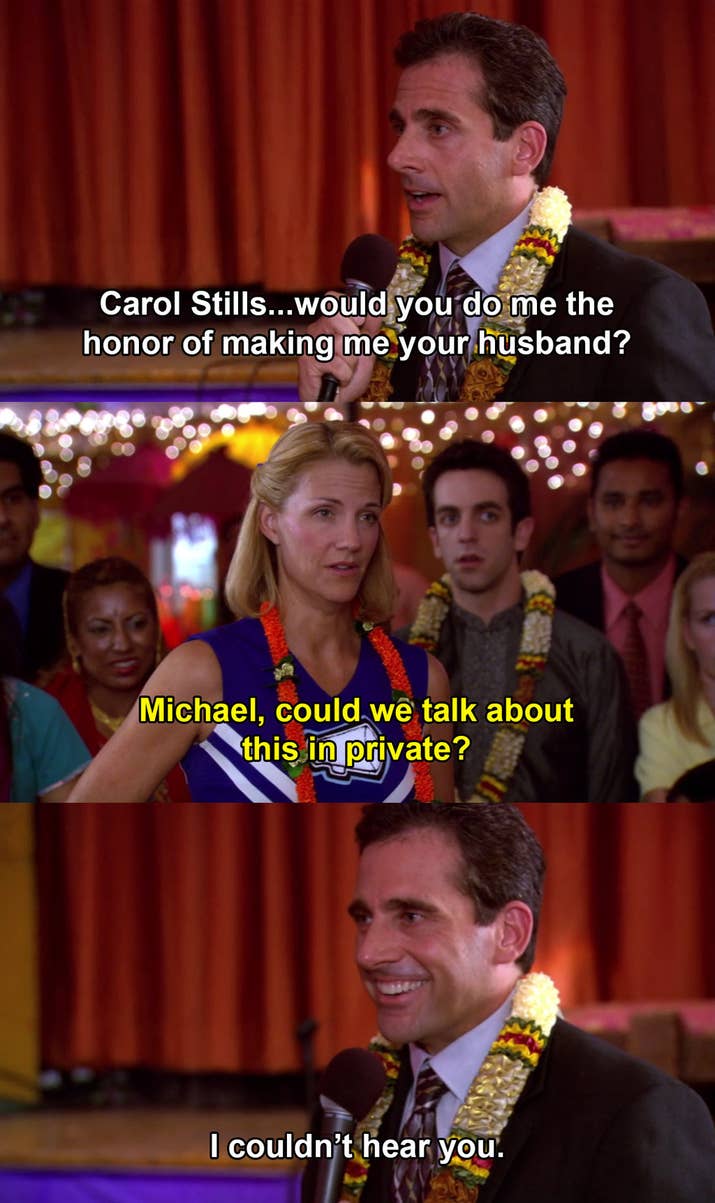 Why It Hurts To Watch: It’s important to remember that Carol is in a cheerleader outfit because Michael had told her that Diwali is basically an “Indian Halloween”. Michael was just proposing out of desperation and even though we all knew that, watching Carol’s rejection in front of everyone was so awkward and sad.

Cringeworthy Recap: I still can’t watch this scene without having to look away. It was a perfect example of Michael’s ineptness and inability to read a situation. 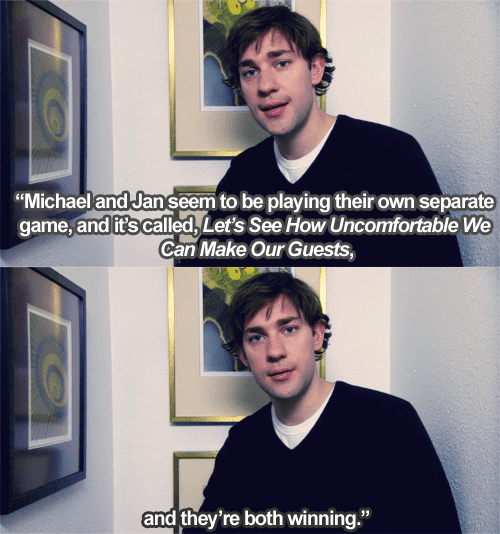 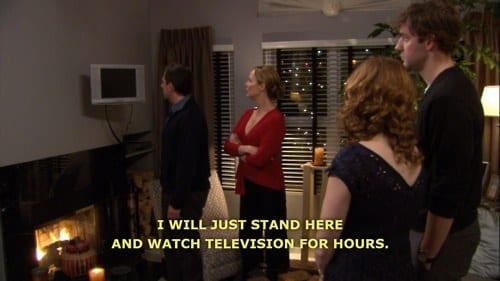 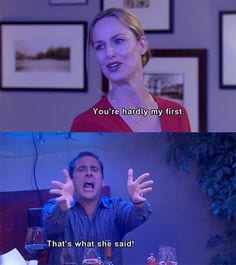 Cringeworthy Recap: There were just too many classic moments from this episode to only pick one photo. The entire dinner party is a complete disaster filled with cringey moments and hilarity, making it one of the best episodes of the series. From Michael’s plasma TV to Jans inability to serve dinner to Dwight and his old babysitter crashing, “Dinner Party” is the some of the most cringe-worthy yet enjoyable material of the show.

When you think of the worst thing that Michael Scott ever did on The Office, chances are you go straight to Scott’s Tots, the group of kids that he promised he would pay all of their college education for once they graduated high school. Well, Michael can barely afford a condo in Scranton so it was immediately clear that he was going to have to tell these kids that the free education they worked so hard for was nowhere in sight. Instead, he got them some laptop batteries. It. Is. The. Worst. It’s peak Michael Scott and will always be the ultimate cringe moment.