News broke this morning that has us a bit bothered. It was reported that Lauren Cohan is actually not even contracted for season 9 of The Walking Dead. This could be for a myriad of reasons, but all-in-all, it makes me sad.

Now I want to preface this with the following:

I don’t know the exact details of the contractual deals that go on behind the scenes at AMC or any network. I understand that business is business sometimes. I also am aware that Lauren may be intentionally looking into other roles for her personal reasons and she has every right to do so. She is a young actress and she may want to grow and expand. If that is something she would want to do, I completely support her and I look forward to seeing her in whatever she does next. (Barring the fact that my opinion of any of that does not matter.)

Now, if by some chance, she is leaving for some other reason out of her control, or because she needs something more in order to do it, whether that’s a honeycomb full of bumblebees or a year’s worth of rollerblades-it’s not okay, and I need to get a few things out. I’m hoping that maybe this will catch somebody’s eye, and that maybe it will make a slight difference. As fans, all we can do is try from afar and I hope it’s not too late.

Here are 10 reasons why we need Maggie Rhee on the The Walking Dead.

As of season 8, she is with child (Glenn’s child *ahem*) and she is not even showing yet. So we can guess that she won’t be having her baby unless the back half of season 8 flashes forward significantly. In fact, we know she won’t be. The fans need to see Maggie as a mother to Glenn’s child. We need to see the baby come into the world. That’s just obvious. That leads me to reason number 9. 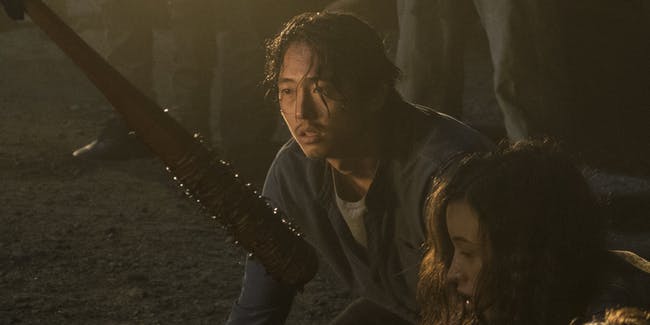 I don’t know if anyone recalls this, or if we forgot. But in the beginning of season 7, Glenn Rhee was brutally murdered by Negan. I didn’t post the aftermath photo because it is emotionally damaging.

Love Negan, hate Negan, or love to hate Negan, we’re still here folks, and Glenn is still gone. When he was killed off, it was for the good of the storyline. I repeat. The. Good. of. The. Storyline. And it sucked but we were all cool with it right? We were! (Storyline.)

But, Maggie isn’t even having his baby this season! The storyline he died for is not over yet, and in my eyes, it won’t be over not only until Negan is taken care of, but when Maggie gets to live a kick-butt mom life leading the group. And even then, we need at least a season and a half of just that.

Glenn lives on through Maggie. If we lose Maggie, we lose Glenn. We’ve already lost Glenn. We don’t need to lose him again! What is even going on right now? I think this reason stands on its own.

Listen, we’re losing Carl. CARL. We weren’t even supposed to lose Carl-ever, but we’re still all here wanting to be fans of this show. (Minus a few, because people are pretty angry about that, so angry that there’s a brand new showrunner now-thankfully and our only hope right now.)  I’ll say again, we weren’t supposed to lose Carl. To take somebody else extremely important to the show is going to push it so over the edge that it makes me nervous for what the show would even turn into.

Maggie is the only person in the group that I’ve warmed up to as a new leader of the group. She’s the only person who can do it. She’s been there. She’s seen everything we’ve seen. Rick is tired and he’s going to need a break when Carl is gone. God love Daryl but he’s not going to lead the group. (Oh and by the way, he can’t leave either, but today isn’t that day. For the good of all of us let’s hope it doesn’t come soon.)

Maggie Rhee represents a huge demographic of people in the world right now. Many of whom watch The Walking Dead. Many of whom love television series that include strong women. She’s a young woman. She’s strong. She was in love and lost love. We have Carol, Tara, and Enid-but Maggie brings a whole other dimension to the show. Considering what’s going on in the world, it would be stupid to let her go. (Who took home the most SAGs and Golden Globes? Big Little Lies, I, Tonya, Lady Bird, Handmaid’s Tale, Marvelous Mrs. Maisel, The Crown. Strong Women are IN right now.) I know Hollywood can be too political sometimes, but I live to watch strong women kick butt. Maybe we just need to let Maggie run the show for a while. Maybe she will save it.

Maggie doesn’t only represent Glenn. Both her father and sister were also victims of the apocalypse. Hershel’s death in particular really did a number on fans. They of course accepted his be-heading in hopes that it would do something good for the story as well. Being emotionally invested in those original characters is crucial for fans to keep coming back, and our options keep on dwindling.

We’ve been set up for multiple changes that revolve around Maggie.We understand that Maggie is going to be taking over for Rick as leader of the group. He has told her that. He has prepared her and all of this has also prepared her. We can’t have somebody from recent seasons take over for Rick. We aren’t invested in them the way we’re invested in Maggie.

She also has miles to go with her friendship with Jesus, and her relationships with the other characters.

This little Walking Dead fan was thrilled to meet Lauren at a Walker Stalker Con. She even inspires the children.

2. Fans love to hear her opinions and see her at events.

Here she is again, speaking about how it is to play Maggie at a Walker Stalker Convention.

#LaurenCohan smiles at a fan’s question at #WSCAtlanta! #TWD #Maggie

Maggie is one of the only two women who have been around since the first few seasons. If she leaves, Carol is the only one left. Lauren Cohan is our Maggie, and if Maggie leaves, the show is officially not the same.

We want to hear why you want Maggie to stay. What are your thoughts on the whole thing?