Long before all of the Taylor Swift snake drama, we had that iconic moment when Britney Spears whipped out an actual snake during her performance of “Slave 4 U” in 2001? This moment is still one of the most memorable moments to come out of the VMAs.

2003 – That time Madonna, Britney and Christina Made Out

A couple years later Britney was back in the VMA spotlight. It’s easy to forget that Christina Aguilera was actually on stage during this 2003 moment that left people completely shook, especially Justin Timberlake. The camera cut to Britney’s ex immediately after she locked lips with Madonna, nearly cutting off Christina’s own kiss with Madge.

The 2009 VMAs premiered just a few weeks after Michael Jackson died and fans were treated to a totally badass and beautiful tribute to the King of Pop by his sister, Janet.

I mean this moment speaks for itself, but for lack of better words, it was definitely the best moment in VMA history.

Swift was able to say her peace the following year after the Kaney drama at the scene of the crime when she gave an emotional performance of her song “Innocent”, which was written about the incident.

Queen Bey ended her spectacular performance of “Love on Top” by opening her blazer to reveal that she was pregnant. The entire crowd went wild and the joy on Jay-Z’s face really takes the cake.

Oh, Miley. This is definitely a top contender for most memorable VMA moments. The Disney star was in the midst of shedding her Hannah Montana image and took it extremely far during her performance with Robin Thicke. It was Miley like people had never seen before, but it was only the beginning. She took to Instagram today to make a fun callback to the night.

Taylor Swift has definitely brought the drama to the VMAs throughout her career and one standout moment was when she called out Harry Styles after winning the award for Best Female Video she made sure to throw in the subtle “I also want to thank the person who inspired this song, who knows exactly who he is, because now I have one of these.” Then cut to an awkward Harry in the audience. 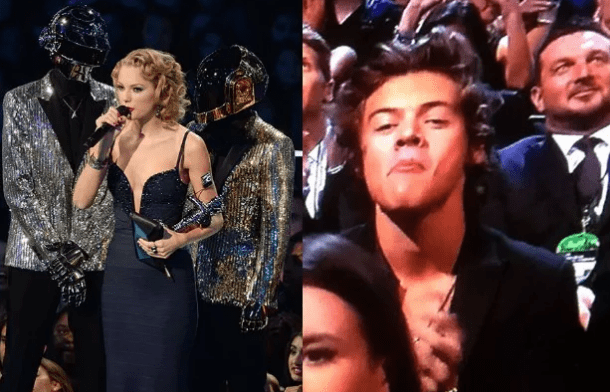