It’s an exciting time for TV as the 69th Annual Primetime Emmy awards are coming up this Sunday, which will recognize the best and the brightest shows, actors and creative teams on television. With award powerhouse Game of Thrones not eligible this year, the nominations took an endearing turn as various actors and series were able to get some recognition that may have been originally overlooked, and some shows were even able to get multiple nominations in the same category. One of which is This Is Us, which found Gerald McRaney and Denis O’Hare both nominated for Outstanding Guest Actor in a Series and Milo Ventimiglia and Sterling K. Brown nominated in the Outstanding Lead Actor in a Drama Series category. 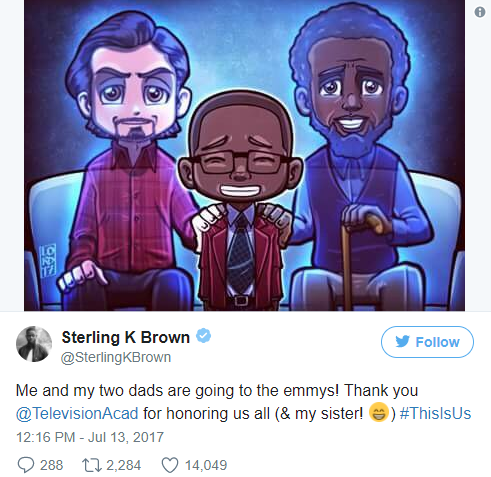 Now, having two actors in the same category is extremely exciting and definitely sparks both some fun and a little competition on set, but, what are you supposed to do when the characters you are nominated for are father and son? EW had this question for Brown, who plays the lovable Randall Pearson in the present day timeline, what the proper etiquette is for him and his co-star Ventimiglia who plays his father Jack in the show’s past timeline.

“Normally I would say Dad is supposed to let me win, but I’m actually older than Dad, so maybe I’m supposed to let him win? I’m not really quite sure. Somebody on set asked us that, and we both said, ‘Look, we got to go up against Keyser Soze (Kevin Spacey nominated for House of Cards) and Hannibal Lecter (Anthony Hopkins nominated for Westworld)! There’s no guarantees for anybody in this particular case.’ We’re just happy to be invited to the party right now.”

They got the chance to speak with Ventimiglia about the same thing a few months down the road and of course, his answer was the epitome of something that Jack Pearson would do because Milo Ventimiglia is literally Jack Pearson.

“I’ll tell you what,” he said, “I went on the Emmy website and I tried to vote for him, and I realized I couldn’t vote in my own category, and it kind of broke my heart. I was voting for Sterling. I was in my trailer, and I was like, ‘I’ve got some time. I’m going to vote.’ And I went on to vote and my category wasn’t there, and I was so pissed. I ended up walking over to his trailer and saying, ‘Hey man, I tried to vote for you, but it wouldn’t let me. So I’m just telling you that I wanted to vote for you.” 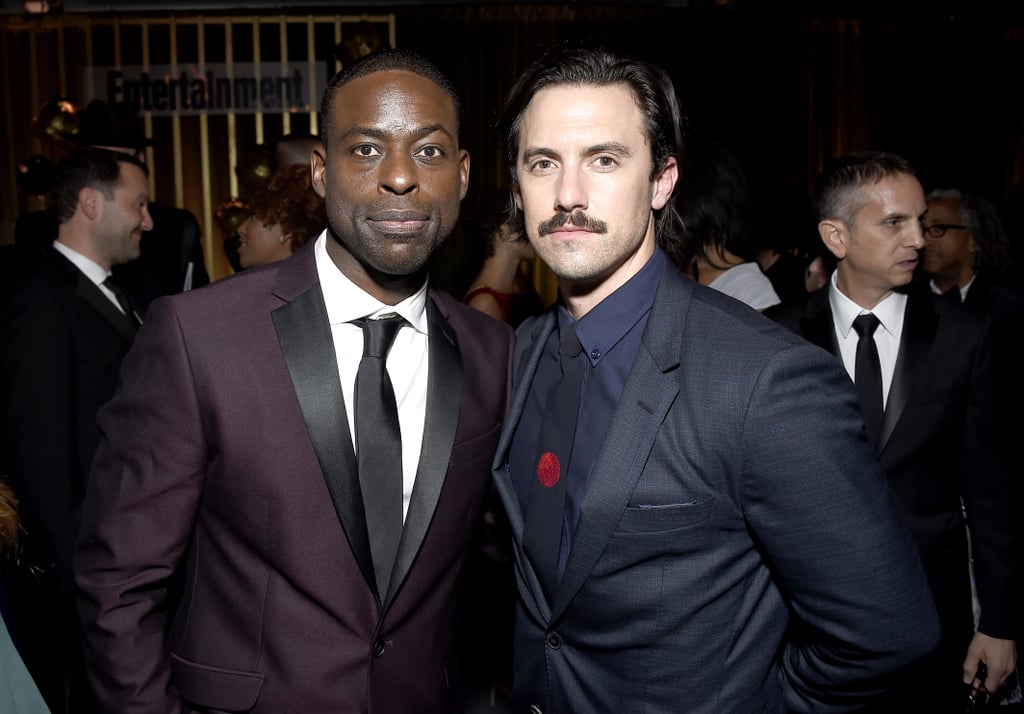 While Ventimiglia’s other network breakout show Heroes was nominated in 2007, this nomination is a personal first for his career and he’s being completely humble and excited about the journey.

“I don’t even look it as a ‘Best Actor’ category, I look at it as ‘In Best Company’ category. Because there’s a lot of great acting out there, there’s a lot of people that are doing good work, and to separate just a handful I feel like sometimes diminishes the great work that isn’t getting recognized. So I think it’s just the ‘In Best Company’ award. You’re in the best company.”

Ventimiglia and Brown are up against Anthony Hopkins for Westworld, Kevin Spacey for House of Cards, Bob Odenkirk for Better Call Saul, Matthew Rhys for The Americans and Liev Schriber for Ray Donovan. Be sure to tune into the Emmys on September 17, 2017, on CBS at 8:00 EST. They will be hosted by Stephen Colbert.

More on This is Us and The Emmys:

These are the Scenes That Basically Secured Milo Ventimiglia and Sterling K. Brown’s ‘This Is Us’ Emmy Nominations

Here’s Who Was Winning at the 2007 Primetime Emmy Awards

Home » Featured » #1 Dad Award Goes to Milo Ventimiglia for Trying to Give His Emmy Vote to Sterling K. Brown